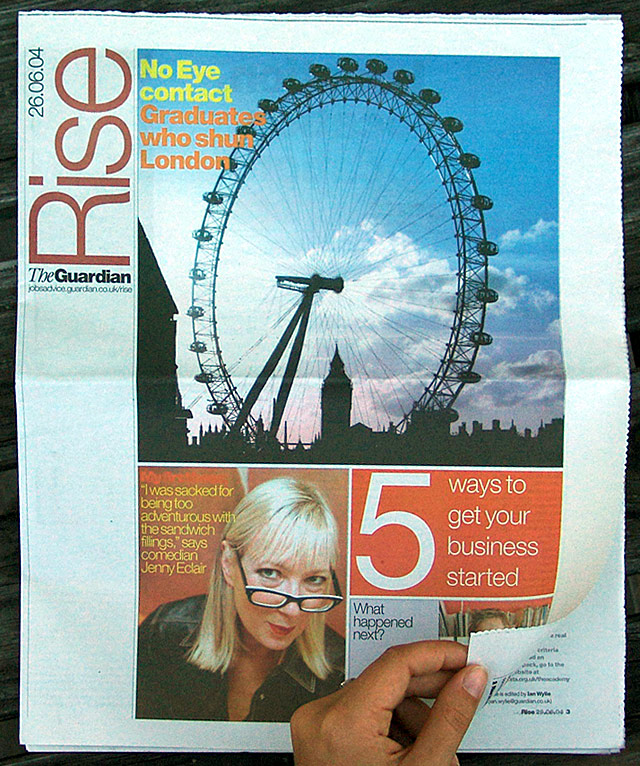 THE GUARDIAN | RISE: SOWING SEEDS FOR SUCCESS
You needn't wait till graduation - Liz Brown reports on five ways to start a business while at university | As well as being places of learning, universities are often seedbeds for new businesses and platforms for the entrepreneurs behind them. Whether you're dreaming up your business idea, meeting potential business partners, exploring untapped markets, or all of the above, your time on campus is a unique opportunity to put the building blocks in place.
1. Make the most of the people around you
Illustrators Simone Lia and Tom Gauld met at the Royal College of Art (RCA) and set up Cabanon Press when they graduated in 2001. Charlie Osmond and Caroline Plumb of research and recruitment consultantcy Fresh Minds met at Oxford. Designers Tomi Vollauschek and Agathe Jacquillat, now FL@33, also met at the RCA. "It's important to get to know each other's thought processes, working methods, techniques, strengths and weaknesses before setting up a business," says Tomi.
___ John Lawler's company, Madventurer, which organises adventure and development projects in Ghana, began as a Newcastle University society. It was also a source for project leaders, travellers, and his business partner.
___ Charles Dalton-Moore and Andrew Davies are developing their clothing label Eloquio at Warwick University, and Ed Jones set up United Soccer Coaches (USC) in 2003 during his first year at the University of Wales Institute, Cardiff. USC employs professional soccer coaches from the UK to work as camp counsellors and club trainers in America. "Because the university has a strong sports...

...record, it's a great source of potential employees," he says.
2. Combine your studies and skills
Photographer Simon Stock had worked as a freelancer before completing his degree in 1993 and continued to do so while studying. "Unlike most people, I didn't experience a culture shock when I left college," he says.
___ Ed Jones' course and business are a perfect match, too. "I'm learning skills through university that will benefit USC, and likewise I've learnt skills through USC that benefit my studies."
3. Avoid key pitfalls
David Millar runs businessdynamics which organises entrepreneurship roadshows aimed at 14 to 19 year olds. "Their main fears are the amount of money they believe it will cost, fear of failure, and lack of confidence in their ability," he says. "We try to address these misconceptions by introducing young people to successful young entrepreneurs, giving them advice on where they can go for funding, and useful organisations to contact for information and guidance."
___ Money can be a major issue, but John Lawler was unwilling to be derailed by financial concerns: "If you've got the idea and you've got the passion, money should never get in the way."
___ Tomi Vollauschek and Agathe Jacquillat agree: "Our start-up capital was energy and optimism; we had most of the equipment we needed already," says Tomi.
___ But Ed Jones cautions that "it's worth doing things properly from the start. Otherwise you end up going back to change and fix things." Business plans are a necessity but writing one brings focus to the operation.
___ Be protective of potentially vulnerable ideas. "Before I went public I made sure I secured the intellectual property rights on my designs and the processes," says Kelly Atkins - there's a patent pending on the techniques she developed at Carpet Burns.
4. Network and get good advice
Kelly keeps in close contact with her Prince's Trust mentor, as well as other fellow start-ups: "It's good to be able to ring up other start-up companies - often we're all having the same problems."
___ John Lawler agrees: "You find out all about the grants and escape the hurdles. And the more advice you give to your friends, the more they'll come and help you. That support is invaluable."
___ "We thought there were two things that would stop us having a successful company," says Charlie Osmond. "One was lack of experience; the other was lack of contacts. We thought that lack of experience would be the biggest issue, but we quickly learned that in fact it was lack of contacts." Like many, he and Caroline Plumb began by talking to family and friends, but then wrote to business people they admired to ask for advice - which was usually forthcoming. This also had unexpected rewards: an investor and future clients.
5. Take the help available
Charlie, Caroline and Ed Jones are taking part in businessdynamics roadshows this summer. Kelly Atkins, John Lawler, Charlie and Caroline were all supported by Shell LiveWIRE. Charles Dalton-Moore and Andrew Davies found Business Link invaluable. Kelly Atkins and John Lawler were assisted by the Prince's Trust.
___ Channel 4 also runs an online resource called Real Deal, which aims to help young people test and develop their business ideas. These initiatives are aimed at helping would-be entrepreneurs - don't ignore their assistance. 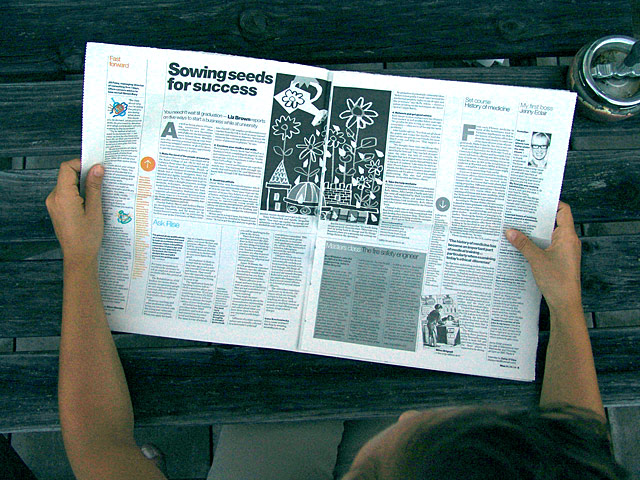 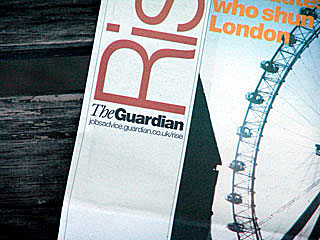 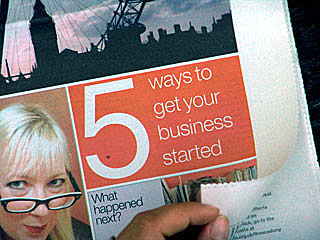