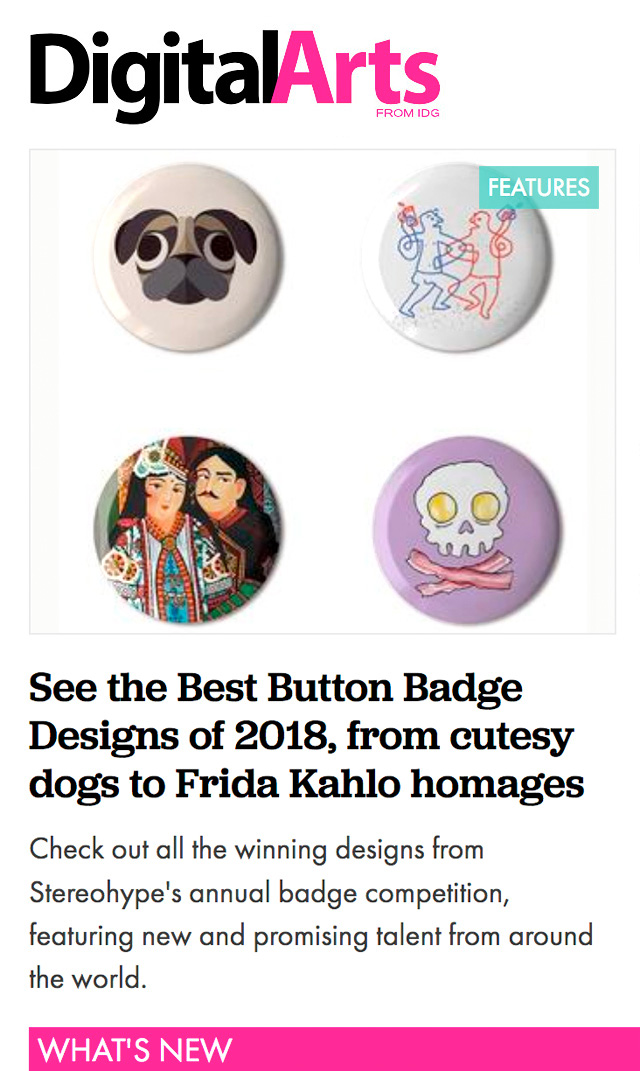 SEE THE BEST BUTTON BADGE DESIGNS OF 2018, FROM CUTESY DOGS TO FRIDA KAHLO HOMAGES
Check out all the winning designs from Stereohype's annual badge competition, featuring new and promising talent from around the world.
___ For the last fourteen years graphic art label Stereohype has held a button badge competition open to artists the world over, and each year we get some fantastic designs from exciting new talent.
___ 2018's winning designs range from Frida Kahlo-esque badges to cute doggy illustrations, as plucked from 680 accepted entries.
___ These were then whittle down to 60 shortlisted designs, 30 winning designs overall with six overall winners for the single badge and sets of four categories, with one special prize awarded for each. Winning artists include Camille Whitcher, Vuk Babovic and Aranza Serafin, all names to keep an eye out for in 2019.
___ There were 26 judges and judging teams looking at the work of over 200 artists, including our own Neil Bennett of Digital Arts, Stereohype’s parent company design studio FL@33 and winners from last year like Aimee Morris and Jaye Kang.
___ All the winning badges can be purchased here on the Stereohype site, and you can even order them in print and giclee print form, just in time for Christmas.

B.I.O. (By Invitation Only) Button Badge Series 18
Selected international designers, illustrators and artists were also invited by Stereohype to submit designs for their B.I.O. (By Invitation Only) series. With almost 80 different designs, the B.I.O. Series 18 badges include designs by Matthew John Oakley, D-Fuse, Andreas Gnass and Maria Nechaeva, who designed these black and white beauties. Picture credits: Seven black and white badges by Maria Nechaeva
___ Some of the B.I.O. badges are being given away as free surprise badges with selected Stereohype T-shirts, and you can purchase them individually or as gift boxes containing seven badges each. We wouldn't mind these cool/ugly ones by Renaud Vigourt for Christmas, thanks. Picture credits: Seven badges by Renaud Vigourt