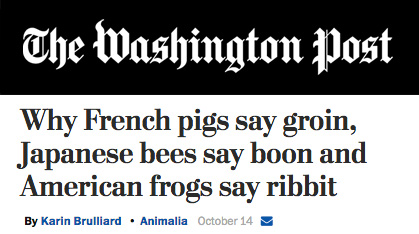 THE WASHINGTON POST | 14 OCTOBER 2016
I have a 1-year-old and a 3-year old, which means I spend a ridiculous amount of time making animal sounds. The protagonists of the books I read to them are bears, ducks and cats. The songs I belt out in the car feature baa-baaing black sheep and cows with a moo-moo here and there.

___ This can get complicated, because we have a bilingual household. My French husband speaks to our girls only in his native language, so there’s quite a bit of mixed messaging. A pig, Sandra Boynton and I tell them, says “oink.” A pig, he tells them, says “groin,” which is pronounced more like “grwahn.” A horse, I tell them, says “neigh.” A horse, my husband tells them, says “hiii.”
___ The girls take this in stride. After all, they’re learning two versions of most words.
___ But animal noises — or, rather, the sounds we humans make or write to depict animal noises — are different from most words. Rather than naming an object, such as “dog,” or action, such as “bark,” they are supposed to represent the actual sound an animal makes: “Woof.” That’s called onomatopoeia, which Jean-Jacques Rousseau and other thinkers posited was the origin of human language. That idea, which has since been widely dismissed, is now derisively known as the bow-wow theory.
___ But why aren’t animal sounds the same across languages? But for a few exceptions tenuously identified by scientists, animals speak the same language all around the globe. Shouldn’t the way we make their sounds be the same, too?
___ There’s been surprisingly little academic research on this [Washington Post update: Or so I thought! After this post was first published, several linguists reached out to let me know that, in fact, there’s been a whole lot of study of onomatopoeia, some of which touches on animal sounds. Read on for input from one of them, Princeton University linguist Byron Ahn]. But there are plenty of cute online demonstrations of the different sounds, like this new interactive from GoCompare.com, a British firm that compares insurance, including for pets. In Hungarian, it informs you, a pig says “röf-röf.” In Arabic, a horse says “saheel.”

___ Another sweet one is Bzzzpeek, a site that features recordings of native speakers of several languages, mostly children, doing their sounds of animals and vehicles. Take a spin through it and you’ll find that there’s fairly widespread agreement about cats’ “meow” sound, though not in Japanese (their kitties say “nya-nya”). A horse in Lithuanian sounds downright weird to my American ear: Something like “yii-gaga.” A lion’s roar in Polish is familiar, not to mention quite frightening.

___ Derek Abbott, a physicist and electronic engineer at the University of Adelaide in Australia, has compiled one of the largest collections of animal sounds, which he’s put together in a table that you can see here. As might be obvious from Abbott’s specializations, this is a side project for him. He said in an email that he’s gathered them by asking scientists “during coffee breaks” at international conferences what words are written in their languages in cartoon bubbles or children’s books to express an animal sound.
___ Abbott said he hasn’t found formal research that addresses this specific topic, and he speculated that “the academic world simply overlooked what was thought to be children’s talk.” But, he continued, “it is loaded with a gold mine of cultural, scientific, and linguistic questions, so definitely deserves study.”
___ Ahn said he regularly discusses animal sounds in introductory linguistics classes “because they reveal some really interesting things about human language.” One is what’s known as “arbitrariness,” or the idea that many word sounds have nothing to do with with the concepts they describe — they’re just random. Onomatopoeic words, of course, are not random, but they have some arbitrariness, Ahn said. For example, studies that have measured the frequency of bee wings make show they don’t make a “Z” sound, but many languages approximate the sound with a “Z” anyway.
___ One reason for that is the human physiology that, unfortunately for bee impersonators everywhere, means “our vocal tracts don’t produce the sound that a bee makes,” Ahn said. Another is phonology, or the tacit rules about the way a language sounds. In English, Ahn said, we don’t use words comprised of just one consonant, like “Z.”
___  “If I want to make a word out of it, I need to provide it with a vowel,” Ahn said. Hence the addition of the “U,” to the bee’s sound in English. So why don’t we just say “uzzz”? Well, probably just because some English-speaker decided to add a “B” at some point, and that stuck, Ahn said. “It became a convention of the language to do it that way.”
___  The written hissing sound of a snake, Abbott has found, is pretty similar across 15 languages. A wolf’s mournful howl — “oou” in Dutch and “huu” in Italian — is also fairly uniform. But his table also reveals some surprises.
___ One is that the sounds we assign reflect the languages themselves. That French pig noise is aided by a nasal sound that’s common in that tongue, for example, and maybe captures something in a pig’s grunt that we English speakers can’t. In Japanese, Abbott found, a bee says “boon-boon.” It’s the only language he surveyed that doesn’t assign some sort of “Z” sound to the bee. Ahn said that is because Japanese phonology dictates that words generally cannot end in consonants — “with the sole exception of Japanese’s ‘n’-like sound.” (And it’s why the Japanese depict the “tick-tock” of a clock as “kachi-kachi.”)
___ “A scientific question that needs to be answered is: Are the Japanese hearing a ‘Z’-like sound in the first place but have no interpretation, or are they actually hearing the ‘Z’ differently in the first place due to their conditioning?” Abbott said.
___ In at least one case, geography has played a role. Only American frogs are said to go “ribbit,” and that’s believed to be because early Hollywood producers used the ribbiting sound of the Pacific tree frog during night scenes.
___ The sounds might also demonstrate the extent to which an animal is worth talking about. English has an array of dog sounds — “woof woof,” “bow-wow,” “yap yap,” “arf arf,” “ruff ruff” — and Abbott said this might be rooted in the large populations of domesticated dogs in English-speaking countries. His table also includes just two languages that assign sounds to the camel. In Australia, where about three-quarters of a million feral camels roam free, they say “grumph.” In Russia, where camels were used to carry ammunition in the Battle of Stalingrad, they say “g-a-a-a-h.”
___ There are, of course, thousands of languages in the world, and Abbott’s table — which, again, has been limited by the population at scientific conference coffee breaks — doesn’t include those from other places where many camels live, such as the Horn of Africa, nor does it include the widely spoken Arabic or Chinese.
___ “China is a huge project,” Abbott said. “Being a vast country, there will be many regional differences and so I’ll leave that up to someone else to take up that cause.”
___ One website, Living Language, has a small table that does include Chinese and Arabic, and it’s a good example of one of the most varied animal calls: that of the rooster. In English, of course, it’s said to rouse the world with a pealing “cock-a-doodle-doo.” In Spanish, the cock says “qui-qui-ri-qui.” In French: “co-co-ri-co.” In Chinese, the rooster has something else to say: “gu gu gu.” In Arabic, it greets dawn with “siyaaH.”
___ The Turks, in my opinion, do the rooster best. You can hear their solid rendition, “ü-ürü-üüü,” on the GoCompare interactive above.
___ By the way, no one, as far as I could find, has yet figured out what the fox says.
___ As for the cow? My 14-month-old is regularly told that it says “moo” or “meuh.” But when I ask her what a cow says, she says without fail: “Brrr.” And who knows? Maybe she’s right.