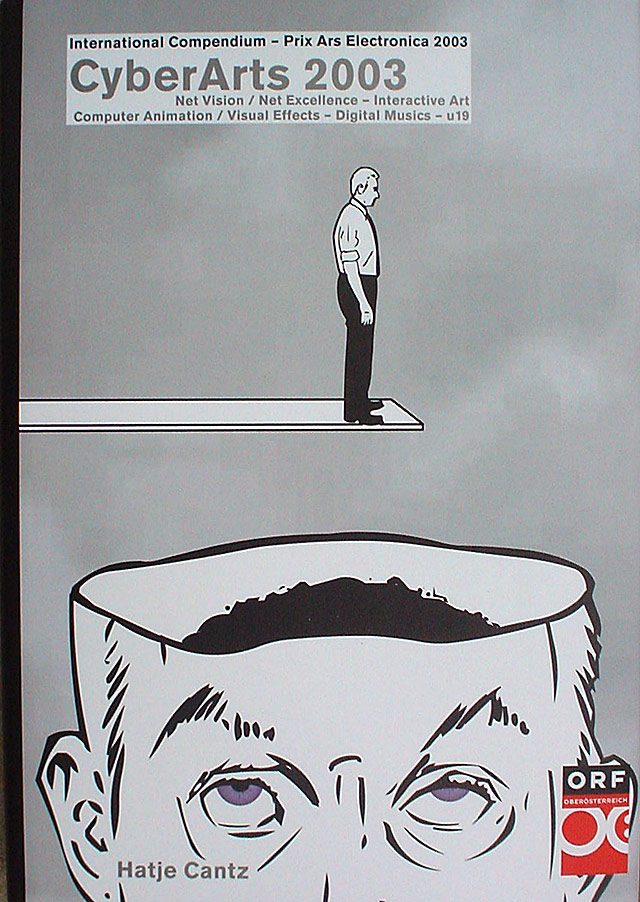 JURY STATEMENTS (ENGLISH)
Agathe Jacquillat and Tomi Vollauschek have created a project which is both fascinating and engaging whilst being educational. It makes use of the international nature of the Internet, the ease of introducing user-generated content and the commonality of sounds. It compares in a charming and inviting way the differences in children's sounds between cultures for a number of everyday things.

PROJECT | FL@33 PROFILE (ENGLISH)
Net Vision / Net Excellence – Honorary Mention | Bzzzpeek.com | Agathe Jacquillat, Tomi Vollauschek, FL@33 | Bzzzpeek.com is presenting a collection of "onomatopoeia" from around the world using sound recordings from native speakers imitating the sounds of mainly animals and vehicles. This self-initiated project by London-based design studio FL@33 focuses on the pronunciation and comparison of these sounds by presenting them side by side as each language expresses them differently. Bzzzpeek.com is an interactive experience inviting everybody to contribute. Submissions of additional recordings representing missing languages are more than welcome. Concept generation and design have been developed with a family experience in mind. The menu is easy to use and is based on a mainly visual approach to invite a truly international audience to interact. Our audience is mainly families, teachers / educational institutions, designers / artists and musicians / sound artists.
___ Since its launch in September 2002 bzzzpeek.com has been awarded the Distinctive Merit Award by the Art Directors Club New York (ADCNY) and has been site of the day, week and/or month in hundreds of publications and websites such as howdesign.com, yahoo.com, usatoday.com, Time-Out New York, Parisian Radio Nova, amongst others.
___ FL@33 is a multidisciplinary design studio for visual communication founded in July 2001 by Agathe Jacquillat (F) and Tomi Vollauschek (A). The multilingual and multi-specialised graphic design team is based in London. Concept Generation, Print, Screen-based Work, Motion Graphics, Exhibition Design and Publishing are keywords to describe the areas the studio is working in. The award-winning team met in 1999 while studying at the post-graduate Communication Art and Design course at the Royal College of Art, London. 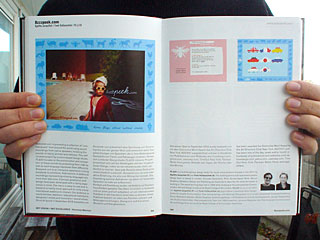 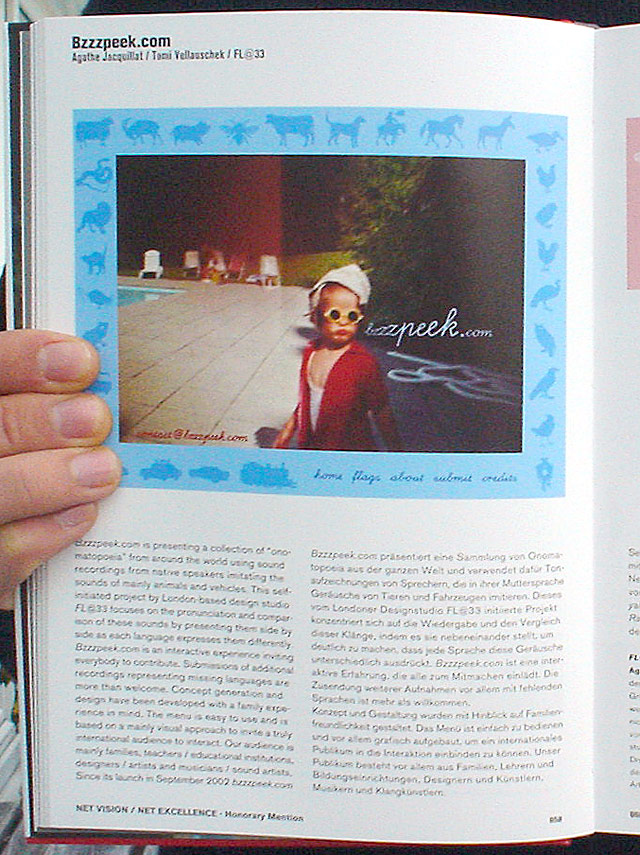 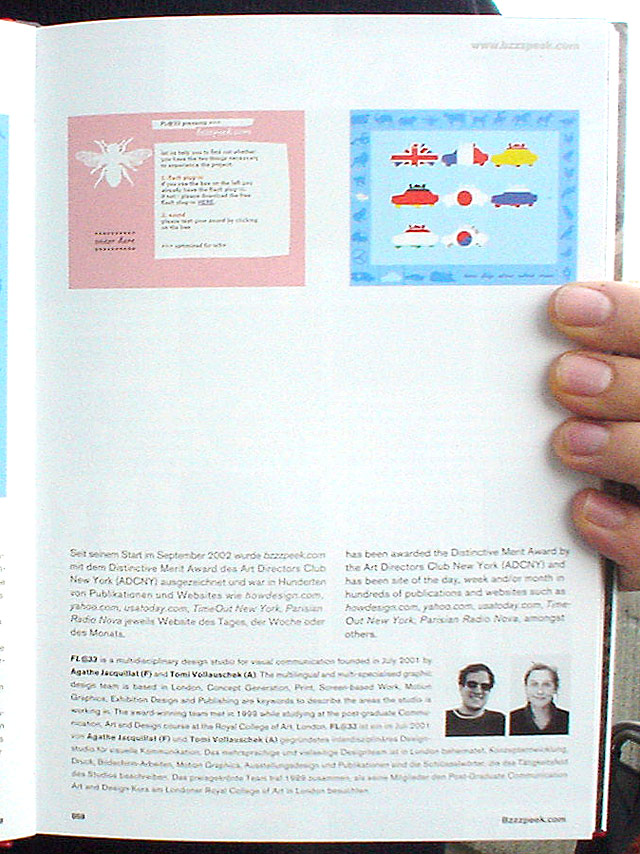 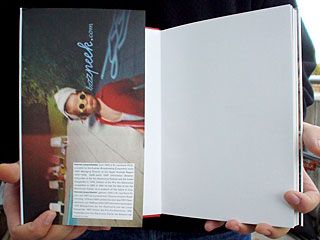 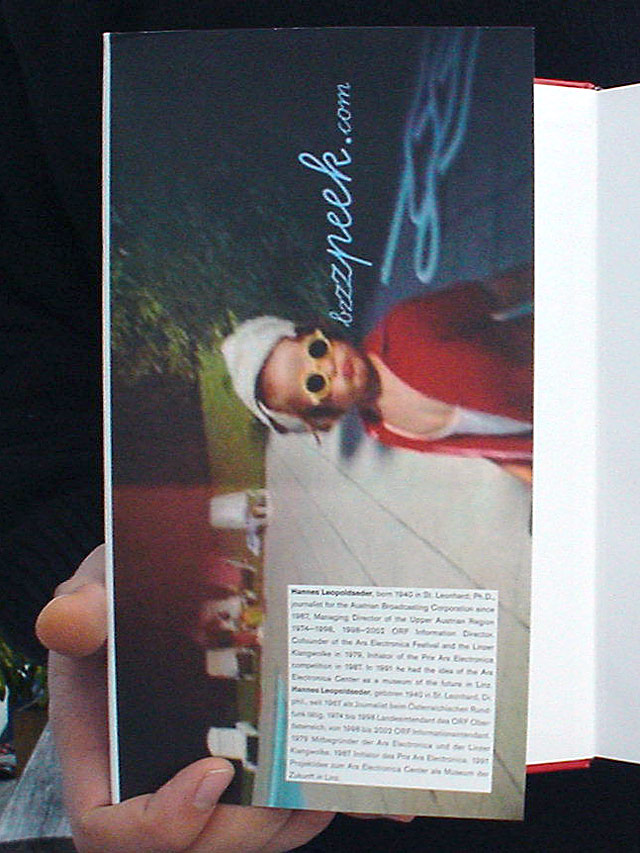 OFFICIAL BLURB (ENGLISH)
Winners of the prestigious Prix Ars Electronica media competition awards for 2003. This complete multimedia reference work comprising a book, a DVD, and a CD presents all of the award-winning works. The annual Ars Electronica festival is conceived as a common platform for artists and researchers from different disciplines in the area of digital media design. In 1987, the Prix Ars Electronica was first awarded by the ORF Regional Studio Upper Austria, and ever since, artists from over sixty countries have submitted more than twenty thousand pieces. As an internationally respected trend barometer of media art, the Prix Ars Electronica impressively illustrates the artistic, cultural, as well as the social implications of digital media, demonstrating the technological state of the arts. CyberArts 2003 presents-in text and image-a representative cross section of the best works in the award categories Computer Animation/ Visual Effects, Interactive Art, Net Vision/Net Excellence, Digital Musics, and u19 Freestyle Computing, all selected by a team of international experts. For the first time, a complete multi-media compendium is included in the package: the book comes with both a DVD with excerpts from the best computer animations and visual effects, and a CD, with excerpts from the category Digital Musics. | Exhibition Schedule: Festival Ars Electronica, Linz September 6 - September 11, 2003